Antonio Esfandiari walks away from WSOP Event #55 $18 Million richer. This is a new event for the WSOP and it is a charity tournament. It is called the $1,000,000 Big One For Big Drop. The buy-in to this tournament is $1 Million. Obviously only a small field of players can pay that buy-in, and only an even more select group can get “backing” or “staked” for that kind of cash.

Luckily, Antonio is one of the lucky poker players who was able to get a buy-in. And because he is, he is now filthy rich! 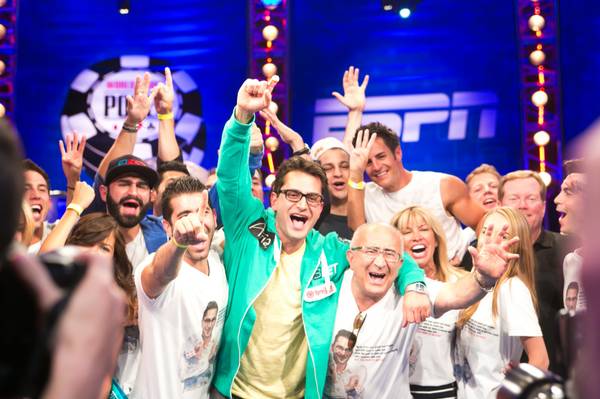 In what is probably the best decision of his life, he decided at the LAST possible minute to enter the tournament. Esfandiari was originally scheduled to be at the announcers table during this tournament. At the last minute he decided to register for the tournament because he was unhappy with the results of a recent tournament that he had entered and wanted to take a shot.

And what an awesome decision it was….

Esfandiari not only won the largest payday of any tournament, but he also walked away with the first ever Platinum Bracelet. This was his second bracelet win, and it may be the pinnacle of his young career.

The top 8 players in this tournament walked away with over $1 Million. Second place Sam Trickett took home an astonishing $10 Million. Even Phil Hellmuth got in on the action and walked away with $2.6 Million and change. However he did post on Facebook and say that he only had 15% of himself, but he can’t complain. You can see the rundown of the prizes awarded below: 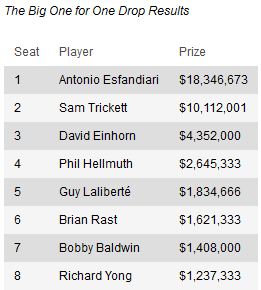