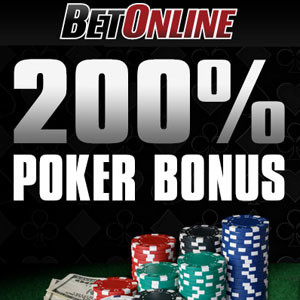 BetOnline has launched a first deposit poker bonus which will double new players´ deposits when they first register an account with the US-friendly poker site.

The move by BetOnline to introduce a new player poker bonus has been long-awaited, and replaces the existing bonus model in which players depositing into their sportsbook accounts were issued with 25% of the value of the deposit in poker “PromoBucks”.

However, unlike most other online sites that accept poker players from the US, BetOnline will not be releasing the poker bonus as players earn VIP Points (actually called “Player Option Points” or “POPs”), but as percentages of their first deposit are paid in rake.

The “progressive” bonus method allows online poker sites to set their own targets about when bonuses are released and how much each bonus is for. Bovada Poker use this system of allocating poker bonuses on their recreational model, and BetOnline have refined the Bovada model to include an extra “stage” – which will help players with smaller bankrolls to earn more of their bonus without handicapping a recreational player.

As first deposit poker bonuses go, the one introduced by BetOnline seems very reasonable and, as traffic on the site is now increasing, it should be possible for players to clear the full amount of the BetOnline poker bonus within the 120 days allowed, even if they have to play outside of off-peak times.

To help players monitor their BetOnline first deposit poker bonuses, we have produced a chart which shows how many POP Points players making deposits in various amounts would have to collect in order to release stages of their bonus into their account. Players should be aware that any POP Points used to enter Sit n Go or Multitable Poker Tournaments are deducted from their overall total and will no longer count towards their BetOnline poker bonus.

You will need to fill in POKERNEW in the promocode field when you are going to make your deposit. Please note that this news item has been placed in July 2013. Make sure to check our dedicated page about the Betonline Poker Promo code for the latest active bonus codes.

Important: Please note that the BetOnline first deposit poker bonuses have to be activated by contacting the company´s Customer Support Department poker@betonline.ag before the POP Points earned at the tables can be used to clear the bonus.

Advice from WinningPoker.org – Calculate how much you deposit into a BetOnline poker account carefully, as it takes fewer POP Points to achieve stage 3 of the maximum bonus (cumulative bonus released at this point $2,000) than it does to clear a full $2,000 BetOnline poker bonus with a $1,000 deposit.