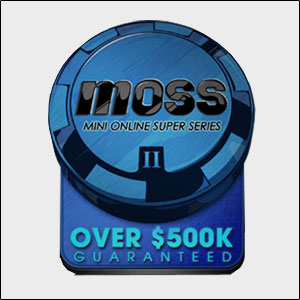 More than $200,000 is guaranteed over the final four days of the mini Online Super Series II with some serious value expected in Sunday´s mOSS II Main Event.

For the past ten days, the 100-event mini Online Super Series II (mOSS II) has been taking place on the Winning Poker Network and enjoying a mixed response. Several of the high buy-in events have far exceeded their guarantees – especially the deepstack tournaments – while many lower buy-in tournaments have cost their hosts a 50% overlay – most recently last night´s $10.00 R/A Event #59 which only attracted 105 entrants, 147 re-buys and 57 add-ons for a $6,000 guaranteed tournament.

However, despite some tournaments seeing more than 700 players – and skins on the Winning Poker Network having an extensive satellite schedule in place – this coming Sunday´s $109.00 buy-in mOSS II Main Event (Event #98) is anticipated to be substantially under-subscribed.

Players whose bankroll does not extend to a $109.00 buy-in – or who wish to get a little extra value – should note that $12.00 satellites to the Main Event run every evening up until Sunday at 18.35pm ET (23.35pm GMT), and the Main Event is scheduled to start on Sunday February 24 at 7.30pm ET (00.30am GMT) with three hours of late registration for those who qualify through a last minute satellite.

Value Available Elsewhere Throughout the Weekend

In addition to the mOSS II Main Event, there are several tournaments over the next few days which catch the eye as potentially offering a massive overlay.

Players not yet playing online poker on the Winning Poker Network can take advantage of the potential overlay in the mOSS II Main Event by registering an account. If you use our Americas Cardroom bonus code WPBONUS, you will get a 100% match bonus on deposits up to $1,000 and – if the first deposit is made by Saturday noon ET – you will also receive an entry into a freeroll tournament guaranteeing 25 seats in the mOSS II Main Event.