Online poker became well-known and popularized in the late 1990s, and the thirst for poker has still not been quenched. It seems that when poker providers give an inch us players clamber to take a yard.

If the vast quantity of online poker sites is not enough, players now want to be able to play online poker on their mobile phones from wherever they may be. 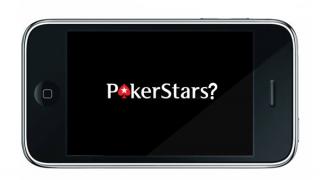 Until recently Iphone and Ipad poker games were limited to browser based games, but Switch Poker Mobile has made that a thing of the past.

At first, the thought of online poker on cell phones made little sense because most cellular phones had screens that would make it difficult to see your cards and all other pertinent information.

On top of that, real money poker play on cell phones was not considered because in the late 1990s and early 2000s most people did not have cell phones that were able to access the internet.

Since then a lot has changed and now phones with absolutely massive screens and faster internet than most home computers exist in full force. 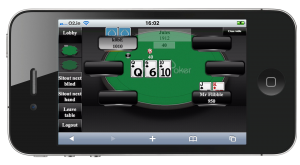 Now poker providers are beginning to create the appropriate software for playing mobile poker on your cell phone.

This particular software is not so easy to create because the designers have to scale the game down to a small size while still retaining all the necessary fold, bet, raise, etc buttons.

If poker operators did not create mobile poker software you would be forced to simply play on your phone’s internet browser; this kind of atmosphere is not very conducive to high quality online poker play.

Luckily, a few sites have already began creating and introducing mobile poker sites for a short while now.

If you are used to Apple operating systems then this may be the first time where a product is actually convenient for you to use.

Switch Poker was designed to specifically cater to the needs of iPad, iPod, and iPhone users. It is for that reason that Switch Poker only works on these aforementioned devices.

At Switch Poker you are able to play for real money at tables with no more than 6 players. As we have come to expect from Apple products the site and application itself are highly functional and actually very easy to use.

You can only play ring games currently, but there have been many talks of introducing tournaments and even Sit n Go events, but that remains to be seen.

Switch Poker has mobile poker apps for Android Phones, Windows Phones, and of course Ipad1 – Ipad 2, and Ipad3 as well as all versions of Iphones. You can also play using all available tablets including Blackberry Playbooks, and Zooms

Unlike Switch Poker, Terminal Poker is able to be used by anyone who owns a smartphone, not solely iPhone users. If you are like me and have an Android powered or Blackberry powered phone then Terminal Poker may be the perfect application for you.

To put it simply, so long as your phone is considered to be a “smartphone” then you will be able to download and use Terminal Poker.

Switch Poker sports 6 player tables but Terminal only has 5 per table. They also have tournaments on a regular basis and the software is so functional that you can check out detailed hand histories to hone your game and fix any flaws.

Something unique and unexpected from a mobile poker site is that Terminal Poker offers a welcome bonus. The welcome bonus is no joke either, it’s a 200% bonus up $400 in bonus funds; a deal better than some strictly online sites.

Mobile Poker Apps in the Future

The reason mobile poker has not taken flight in the US and elsewhere is because of laws restricting the availability of the game.

We are currently at a stage that is seeing a lot of people in a lot of different US states and regions of the world lobbying for the free use of online poker and in turn mobile poker.

You can expect that with the legalization of online poker in the US and elsewhere that a lot more applications will hit the market.

The reason only a few sites and apps exist is because no one wants to waste time and money creating an app that may be illegal in your area.

While we realize the laws restricting the use of real money online poker are stupid, it does not matter until our government realizes how stupid it is as well.

In the current state most poker grinders simply play from their computer because it is easier and most often more convenient.

It is not all too often that you see a dedicated mobile poker player, but as more sites and apps are introduced some are  expecting an explosion on the mobile poker scene.