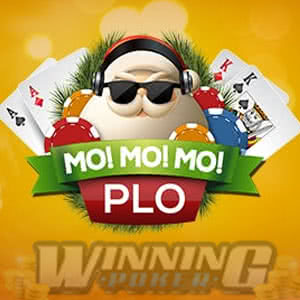 Starting today the Winning Poker Network is running a massive Pot Limit Omaha promotion that could be worth more than $1,000 for every player who takes part.

The Winning Poker Network´s promotion is called MO MO MO PLO – the name representing the three opportunities players have to add to their bankrolls by playing PLO cash games, PLO Jackpots games and PLO multi-table tournaments. Two of the sites on the Network – Black Chip Poker and Americas Cardroom – are also giving players the chance to qualify for a $50,000 tournament for free!

If you have never played at either of these sites, both offer generous first deposit bonuses, action around the clock, and valuable player rewards schemes. Both accept players from most countries in the world and, if you like valuable poker tournaments, both will be running weekly tournaments with million dollar prize pools from next January. Definitely two sites worth playing at.

If an offer sounds too good to be true, it usually is – but there is always an exception to every rule, and this is it. During the promotion (from today until December 17th) the Network is inviting players to “Build Your Own Bonus” up to $1,100 – $100 for each day of the promotion.

Only full sets of one hundred hands count – i.e. you will only be credited with $10.00 of bonus if you dealt into 150 hands – and you can earn a maximum of $100 in bonuses every day. Once credited, you have sixty days to redeem the MO MO MO PLO bonus with the usual clearance structure – 27.50 Player Points per $1.00 of bonus. This is equivalent to 20% rakeback, so a pretty good deal.

The second opportunity player have to add to their bankrolls is by playing PLO Jackpot Poker. One of the most popular games on the Network is its three-handed, hyper-turbo Jackpot Poker games, and these are available in both NLHE and PLO formats at a range of buy-ins.

Before each game of Jackpot Poker starts, a random prize multiplier is spun. The top prize you can play for is 2,500x your buy-in and – during the promotion – the top buy-in for PLO Jackpot Poker games is being increased to $60.00, meaning you could potentially be playing for a Jackpot prize pool of $150,000.

If the Jackpot prize is spun (or one of the other two top prizes of 100x and 200x the buy-in), the three players have to choose whether to play for the default payout of 75% for first, 15% for second and 10% for third, or a more level payout structure of 40% for first and 30% for both second and third. All other games – in which one of the top three prizes is not spun – are played in winner-takes-all format.

Over the next eleven days, the Winning Poker Network is expanding its tournament schedule with an exciting selection of additional PLO tournaments. The feature event of the expanded schedule is a PLO tournament with a $50,000 prize pool on December 17th that takes place at 2pm.

The tournament has a $215.00 buy-in and dozens of seats can be won via paid-for satellites running up to the event. However, the Winning Poker Network is also giving you the opportunity to win your seat for free by playing in its Freebuy satellites.

The Freebuy satellites take place at midday every weekday and at 11am at weekends. They cost nothing to enter, but you can improve your chances of winning by paying for a re-buy ($0.50) or an add-on (also $0.50) at the end of the late registration period. Every Freebuy tournament guarantees a minimum of one seat into the $50,000 tournament, which means you could win more than $10,000 for free!

It all starts at the Winning Poker Network today!