PokerStars is easily the best poker room to play at in 2023, By Using the new February PokerStars Bonus Code PSA3425 you get an instant $600 Bonus, $500 Freeroll Ticket, and up to 55% VIP Rakeback.

The huge bonuses and promotions available at PokerStars attract many new players. The majority of the players that try out PokerStars continue to play here for years and years. Unfortunately PokerStars does not accept players from the United States, but if you are outside of the US then PokerStars is our top choice for online poker play.

We have many special deals in store for our players at PokerStars. When you sign up at PokerStars through our site using our exclusive 2023 PokerStars Marketing Code PSA3425 you will automatically be tagged to receive the best deals PokerStars has to offer.

These offers include a $600 Deposit Bonus, VIP Program, Millions in Guaranteed Tournaments weekly, and much more. We are positive that you will be impressed with the rewards you receive at PokerStars. 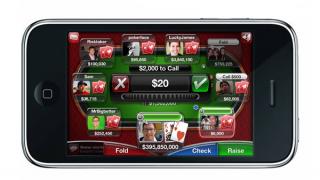 PokerStars continually impresses players with the huge promotions they run. You will need to make sure that you sign up at PokerStars using our exclusive 2023 PokerStars Marketing Code PSA3425 so that you don’t miss out on any of these great promotions. Please see a review of some of our favorite promotions below.

The PokerStars Weekly Multi Table Tournament Leader Board Winner will play in a heads up tournament with a PokerStars Pro for a minimum prize of $1,000. The top 200 Monthly Leaderboard players will compete in a $30K Tournament.

The Yearly Leader Board winners will have huge prizes awarded. This is a great opportunity for Multi Table Tournament players to cash in on some huge prizes.

PokerStars now has the #1 Mobile Poker app which features Zoom Poker which is a lot like Full Tilt Poker’s Rush Poker. Of course Full Tilt Poker is now out of business, so if you are looking for a game like Rush Poker, Zoom Poker is the game for you. Zoom Poker allows you to play a hand, and when you fold you are in another hand instantly, no waiting, no delays.

This allows you to play as much as 300+ hands an hour, and best of all you can multi-table, which means you can put in serious volume and increase your hourly rate quickly. Best of all, this is all featured in the PokerStars Mobile app, so you can play anywhere, anytime!

PokerStars Ipad & Iphone App – PokerStars offers options no matter what mobile device you want to use. The most popular is of course the PokerStars Ipad and Iphone apps. This is a player favorite, mostly because of the bigger view you get from using an Ipad, and the stability of the apple operating system.

PokerStars Android App – As we mentioned above, the Mobile Stars app allows anyone with a smartphone device to quickly download and start playing Real Money Online Poker. The Mobile client isn’t just for Ipad’s and Iphones, they also have a great app for Android phones and tablets. So pretty much any mobile device will get you playing poker fast.

>>Get the PokerStars Mobile App now!<<

The VPPs determine are used to determine your VIP Level. As you move up the VIP levels the rewards get better and better. The FPPs are points that accumulate in your account. These points are very valuable. The points can be exchanged for cash,  used to enter special tournaments, or used to shop in the PokerStars VIP Store.

The PokerStars VIP Program has 6 loyalty levels. Players will start at the Bronze Level and can work their way up through the loyalty levels all the way to Super Nova Elite. As you move up the loyalty levels you will earn points at a much faster rate which will help you move to the next level as you can see on the chart below. 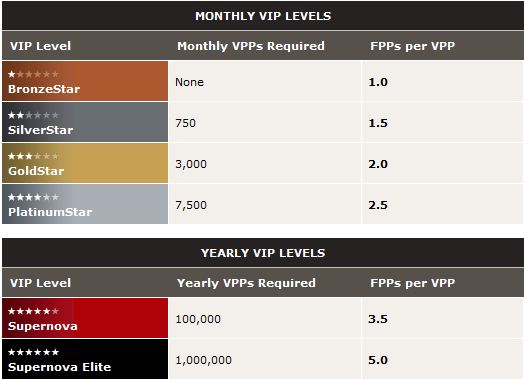 BronzeStar Level players will not be able to purchase SilverStar merchandise even if they have the required number of FPPs to purchase the item. Cash rewards, electronics, live tournament tickets, and just about anything you can imagine, including a Porche Cayman S, can be purchased in the PokerStars VIP Store. 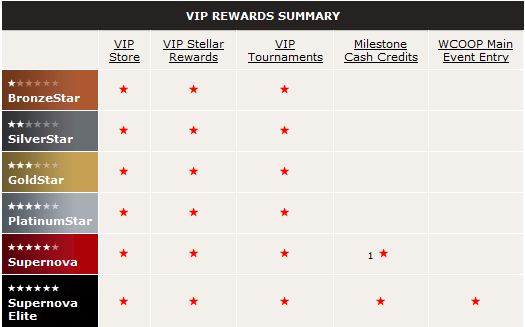 As you can see from the charts above, PokerStars has a huge list of rewards available for players. All you need to do to be rewarded at PokerStars is play real money poker games. The more you play the more you earn.

Cash game players tend to accumulate FPPs quicker than tournament players. Players can easily player multiple tables at the same time at PokerStars which will also increase the amount of FPPs you earn. Be sure to sign up at PokerStars using the 2023 PokerStars Marketing Code PSA3425 to gain instant access to this amazing VIP Program.

If it’s a poker game, you will probably find it at PokerStars. PokerStars has Texas Hold’em, Omaha, Stud, Razz, Mixed Games, and Draw Poker in all popular variations of the game.

Most online poker sites offer a nice selection of games, but almost all the traffic is usually concentrated at the Hold’em games. This is not the case at PokerStars. PokerStars has a huge variety of games running at multiple levels around the clock. Players can easily find a game suited to their needs.

PokerStars Ring Games – All players will easily find a ring game that fits their skill level and bankroll at PokerStars. The stakes range from $0.01/$0.02 up to $200/$400. Multiple games at all levels run around the clock.

The most popular ring game at PokerStars is No Limit Hold’em followed by Limit Hold’em and Pot Limit Omaha. Players can choose the following formats for ring game play: heads up, 6 max tables, and 9 player tables.

You will find that it is very easy to fund your PokerStars account. The deposit options vary by country, but multiple options are available for players. Some of the most popular deposit options at PokerStars include Visa, Mastercard, Ukash, Click2Pay, Neteller, Instant eChecks, Instadebit, and ClickandBuy.

You can be playing real money poker in just a few minutes by downloading PokerStars and choosing one of these easy, safe, and secure deposit methods.

PokerStars not only has easy deposit methods, but cashing out money from your account is also a very simple process. PokerStars is one of the fastest online poker sites to process cash out requests.